Hundreds of Christian leaders gathered in Lancaster, Pennsylvania (USA), during April 13 to 16th (2016) to attend to the 'Voice of the Prophets' Conference - actually one of the most important meetings in an international level - which was accompanied exclusively by Guiame.

This conference's edition had great speakers, as Randy Clark, Kayle Mumbi, James Goll, Larry Randolph and Shawn Bolz & Cherie. During these four days they could share their knowledge of ministry and spiritual growth.

During his speech, Pastor Randy Clark called to get up on stage two great friends he met during his first trip to Brazil: Ap. Joel Engel and the pastor and writer Édino Melo. Both had the opportunity to share their testimonies, which were very cheered by audience.

According to Pr. Clark, those two Brazilian leaders' testimonies can sound as good examples of anointing transfer or 'impartation' - as many leaders are calling.

Before open the way for testimonies of the Brazilian pastors, Clark took care to quote a scripture that talks about spiritual gifts.

"Many years ago when I first went to Brazil, God did something amazing and I want to thank both of you for coming to share your stories. But I have to remind them that we need the Scripture. And the Scripture that I share with you here, now is from Apostle Paul to the Romans, chapter 1, verse 11: 'For I long to see you, that I may impart to you some spiritual gift, to the end you may be established'. This text is al we need, among others, to see that the act of giving the impartation [anointing transfer] is something biblical", He said. 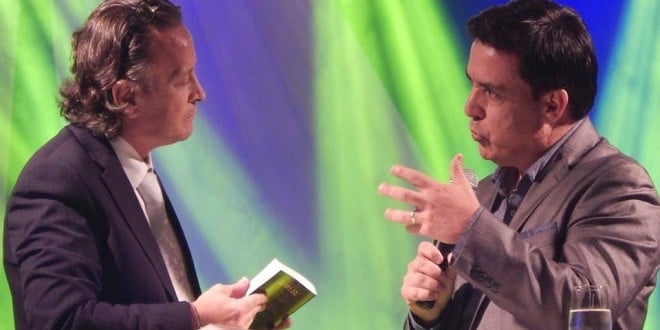 Great changes
Édino reported that he started to witness miracles of healing and also experienced the impartation on services that Clark was leading.

"By the third meeting, I went ahead and something happened to me: An anointing transfer. I started crying, screaming so much. I was wearing a suit and tie. Then I fell and started to shake [...] and I kept that way for six hours. When I got up, I was other person", He said.

Also in his report, Édino said that when He returned to Brazil, had the opportunity to be used by God to bring people healing.

"When I came back to Brazil, people brought me a child with epilepsy, and I had never prayed for healing. But after I red Randy's books and watched their ministrations in Brazil, I began to pray and many things started to happen and that person with epilepsy was healed. Extraordinary things happened", He said.

Pastor Édino also saw miracles happen in his life, when He saw that He could start writing and publishing books.

"I couldn't write. I had been on school and had tried to write books, but I jut couldn't. After I received an anointing transfer, I have written more than 200 books. In average 2 million copies were sold in Brazil. We wrote one book now with a friend and quickly had 50.000 copies. We are writing another one about the Secret Place and We will have about 200.000 copies distributed. That anointing transfer changed my life", he added.

Click the video below to see pastor Edino Melo's testimony:

Dreams came true
After pastor Édino shareh his testimony, Randy Clark invited those in the audience, who had the dream of becoming great writers to talk with him and the Brazilian minister, to pray together for that cause.

"If you want to be a writer, Me and pastor Édino will be right there and we make you an invitation to talk to us", said the lecturer.

Many leaders accepeted Randy's invitation, who had the opportunity to follow Édino Melo in a ministration that lasted for hours on this anointing that the brazilian leader received to write.